My name is Fenriryan, and I am screwed – Tau are getting updated.

Someone has managed to scan and distribute some colour images from WD, which can be found at my favoured info source Faeit212

I will save you the gushing over my love of the Riptide (I like big mechs and I cannot lie…) and Shark aircraft (though where are my plastic Barracuda or Remora?), but instead voice something I think this release heralds that we should all be aware of.

The trend towards large centerpiece models continues, hand in hand with flyer models. Thats fine, they look good, and its relatively balanced to give each army something of this ilk.

But the prices – good GAWD what happened there!

£30 for a SINGLE Broadside! Yes, they are now 60mm based models, but you now what – we didn’t need a new Broadside. Certainly not one that means we all have to rebase our current ones, if not replace them entirely. Given Broadsides were a money spinner for GW, as every Tau player had at least 3 if not 6 or 9, and under new Allies system, they were very popular anti tank allies. Why the fish to the face like this?

The Crisis Suits are remaining priced roughly as they were, only know they are only available in a box of 3 for £45 rather than £15 a pop. Not too bad I guess, but then compare them to Killa Kans, Khorne Juggernauts, Raveners and other similar options. They are £27-£33 for 3, and some of them were new sculpts when released as tripled up plastic kits. Crisis suits have not been redesigned that we are aware of, so why have they not been brought into line with similar units?

So whats it all mean? Have GW lost the plot? Are they trolling Tau players? 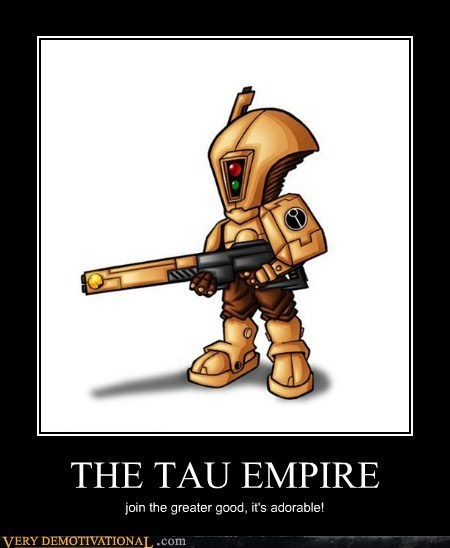 Hell no – it’s April folks – new Tax year, new price rise – I would stake my Talissira bonding knife on it. As such, these could well be the bench marks for where all similar units will jump to.

If this is true, it will be interesting to see how many people jump out of GW. No, I am not saying that the sky is not falling, but it would be fair to say that its cracking.

For the price of a single Riptide, someone could pick up a MERCS gang and rulebook. A unit of 3 Broadsides could be a Warmachine battlegroup box, an extra heavy, a full unit with UA and a solo.

I know that for me personally I had already called day on any new GW armies – I have a Xenos (Tau) and a generic 3++ collection, but its starting to get too much to upkeep them too. Sure, I’ll keep playing what I have, but that will be it – no more purchases short of new edition rules/codex due to their inherent necessity.

I have drawn a line on the sand, and if Tau are a benchmark of whats to come, will you do so also or stick it out a little longer?